Should Your Dog Receive a Leptospirosis Vaccine?

Leptospirosis is a dangerous, life-threatening disease, yet a vaccination for it is not part of the core vaccines every dog routinely receives. Whether your dog should be vaccinated depends on their lifestyle and risk factors. For example, dogs who go camping and hiking should clearly be protected; however, dogs who rarely step foot outside probably have little chance of becoming infected. To help you decide where your pet falls, and whether they should receive the vaccine, our Palmer Vet Clinic team explains leptospirosis basics.

Leptospirosis is an infection caused by the spirochete bacteria Leptospira interrogans, which is shed in the urine of infected animals. Wild animals, including rodents, raccoons, skunks, opossums, and deer, serve as infection reservoirs for other wild animals and dogs.

How do dogs contract leptospirosis?

When infected animals urinate in the environment, soil and water become contaminated with the bacteria, which can live for weeks to months. Bacteria can penetrate a dog’s skin or mucous membranes, and most commonly enter the body through the eyes, nose, or mouth. Dogs often become infected by swimming in or drinking from a contaminated water source, such as a lake, pond, stream, or puddle.

How does leptospirosis affect dogs?

Leptospirosis infection can cause a variety of problems, including:

In addition to affecting dogs, leptospirosis is a zoonotic disease, meaning it can be passed to people. Human infections most commonly occur after people swim in contaminated water, but can also occur from handling an infected dog’s urine.

What are leptospirosis signs in dogs?

Since leptospirosis affects various body systems, the signs can vary. In addition to the symptoms mentioned above, pets may experience generalized illness signs, such as:

If your dog develops any such signs of illness, have them evaluated by our Palmer Vet Clinic team immediately. Although some illnesses are not serious, infections such as leptospirosis can quickly advance and become life-threatening.

How is leptospirosis diagnosed in dogs?

Leptospirosis is diagnosed with a blood test that detects Leptospira antibodies, which indicate the dog’s immune system has recently been exposed to the pathogen. An active infection can be confirmed by detecting Leptospira bacteria in a dog’s urine. To determine the disease’s extent and severity, additional tests may be performed, including:

How is leptospirosis treated in dogs?

Since leptospirosis is a bacterial infection, antibiotic therapy is the most important component of treatment. Pets may require additional supportive care, either at home or in our hospital, while they recover, which may include:

Which dogs should receive the leptospirosis vaccine? 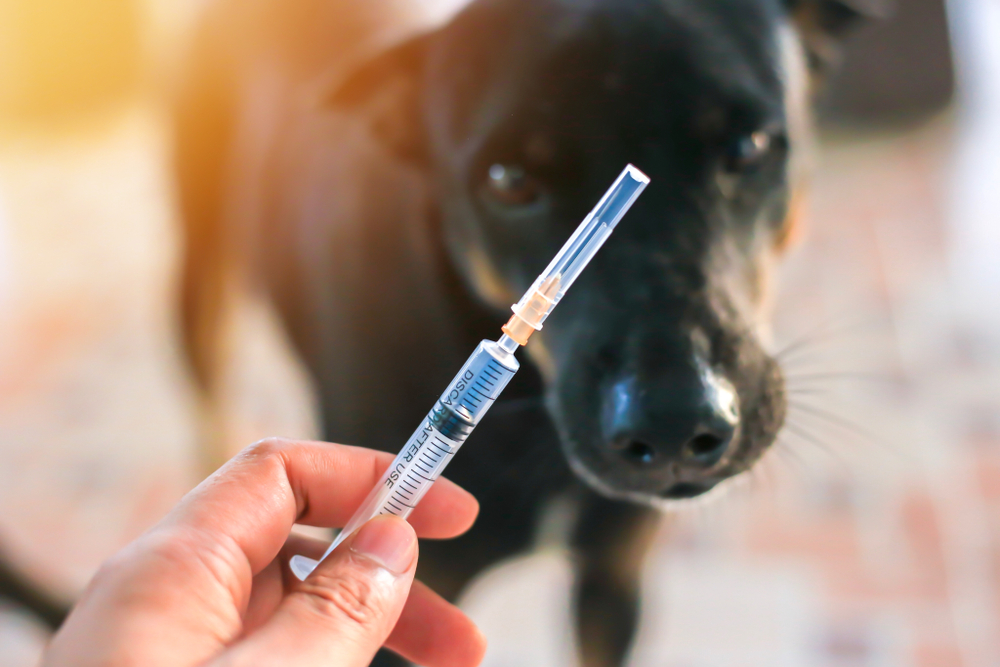 Our Palmer Vet Clinic team carefully considers each pet’s lifestyle and risk factors before making vaccine recommendations. Dogs with moderate to high exposure risk should receive the leptospirosis vaccine, including those who:

The leptospirosis vaccine is highly effective, and is recommended for any dog who may be exposed to infection. Protection lasts approximately one year, so the vaccine should be boostered annually during your dog’s yearly wellness visit.

Leptospirosis is a serious disease, but your dog can be safely protected. Contact our Palmer Vet Clinic team with any questions about leptospirosis, or to schedule your dog’s vaccination.

About the Author: Palmer Veterinary Clinic