Puddles of Pee: What To Do If Your Cat Is Missing the Litter Box

One of the most common complaints of pet owners is that their cat is missing their litter box. Whether they’re urinating right next to the box, or on a favorite sweater or blanket, inappropriate elimination is a frustrating condition that can be challenging to remedy. Instead of becoming irritated when you discover a new puddle in your closet, realize that your cat is crying for help. They can’t tell you when they’re suffering from a medical condition, stress, or other issue that can dissuade them from using their box, so look at the incidents as a sign that it’s time for a visit to Palmer Vet Clinic.

If your cat could talk, they probably would tell a story like Percy’s, a male house cat* who recently became the reluctant housemate of a rambunctious puppy. We wanted to share Percy’s story to help cat owners better understand why their feline friends may be shunning the litter box. Take a look.

Percy is the king of his household—or so he thought—and this large, elderly cat believed his family should cater to his every need. Fortunately, his last housemate, who was a senior Labrador who crossed over the rainbow bridge not long ago, understood Percy’s title and respected his rulings. However, 12-year-old Percy’s quiet life has suddenly completely changed. A bouncing ball of long legs and floppy ears has burst through the front door.

Percy shudders in horror at the thought of going anywhere near that barking beast. Instead, he slinks off to the master bedroom and hides in the walk-in closet until his owners come to their senses and put the pup in his crate.

Percy hid overnight, but had to emerge from the closet for a meal. He had never gone this long without eating, and he was extremely upset about his schedule disruption. As he tiptoed over to his food dish’s normal location, he felt a hot breath on the back of his neck. Percy turned around slowly, and saw the culprit of that horrible puppy-breath smell. Without waiting for introductions, he scampered back to his hideout, the pup close on his heels.

As he hid in the darkness, the pup snuffled around outside the door, and Percy’s discomfort increased. He really had to use his litter box, and his stomach was practically eating itself, but he definitely wasn’t stepping out until that monster had left. So, Percy did what he had to do—he used a fallen sweater as his toilet.

The next day, his owner discovered the mess. She scolded Percy harshly, and shooed him out of the closet and into the living room. The puppy was nowhere in sight, so Percy made a beeline for his food and water dishes, and then went to find his litter box, only to discover that his normal box had been replaced with a large, covered contraption. He was not going to trap himself in that strange box and become easy prey for his new four-legged nemesis, so back he went into the closet to find another sweater.

After two more ruined sweaters, Percy’s owner scheduled an appointment with Dr. Slaughter at Palmer Vet Clinic, where Percy had been going his entire life. Dr. Slaughter listened to Percy’s problems, and his current home situation, including the new puppy, and first wanted to run a few diagnostic tests to rule out any potential medical problems that could be contributing to the issue.

The veterinarian explained, “Since Percy is now 12, I’d like to check him for several conditions that could cause inappropriate elimination in an older cat. I’ll run blood work to ensure his kidneys are functioning properly, and that he hasn’t developed diabetes. I’ll also check a urine sample for signs of infection or crystals that could cause a bladder stone. If these tests come back clean, we’ll consider that Percy is avoiding his litter box because of a behavior issue.”

Dr. Slaughter determined from his test results that Percy was in excellent health. Knowing he had a new puppy sibling at home, she realized that the change in routine at home was the main culprit for Percy’s litter box issues.

She explained to Percy’s owner, “I bet Percy is unhappy about having a new puppy in the household. Cats can be highly sensitive to change, and something as simple as rearranging the furniture can cause litter box avoidance. We’ve ruled out common medical conditions that could have caused Percy’s urinary accidents, so behavior issues are the next step. In time, hopefully, he will accept the new puppy, but for now, he definitely needs a safe space. I understand that you purchased a covered litter box to keep the puppy out, but many cats feel uncomfortable and trapped when they can’t see around them while eliminating. 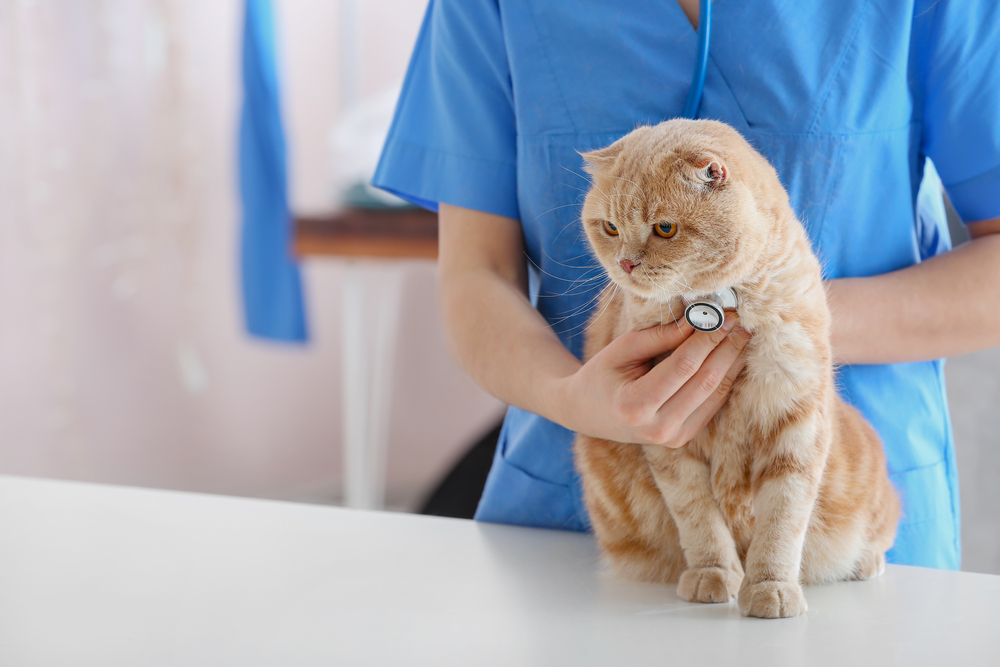 “Also, consider switching to a low-sided box. Percy is getting older, which means arthritis can develop, and climbing over tall sides can be painful. Space out these low-sided boxes so Percy has plenty of choices, and doesn’t get caught by the puppy and be unable to use a box. Ensure you don’t place the boxes near his food or water—nobody likes a toilet next to their dinner table. Keep them away from loud appliances, too, since a noisy furnace or washing machine could make Percy bolt in terror. Above all, keep Percy’s box clean and fresh by scooping twice daily and using unscented, clumping litter, which most cats prefer. If you follow these golden litter box rules, Percy should be comfortable using his box again.”

Percy’s owner followed Dr. Slaughter’s instructions and changed the litter box situation, and the household soon settled into a more peaceful atmosphere. Percy began using his new low-sided box that was located behind a slightly raised baby gate, and enjoyed taunting the puppy from his safe spot.

*Although Percy is not a real cat, many cats suffer from litter box issues that a wide range of medical or behavior problems can cause.

Use the wisdom from Percy’s situation and set up the perfect elimination station for your feline friend. If your cat still misses their box, they may have an underlying medical or behavior issue that requires veterinary attention. Don’t wait too long—seek the help your pet needs by scheduling an appointment with the Palmer Vet Clinic team as soon as possible.

About the Author: Palmer Veterinary Clinic